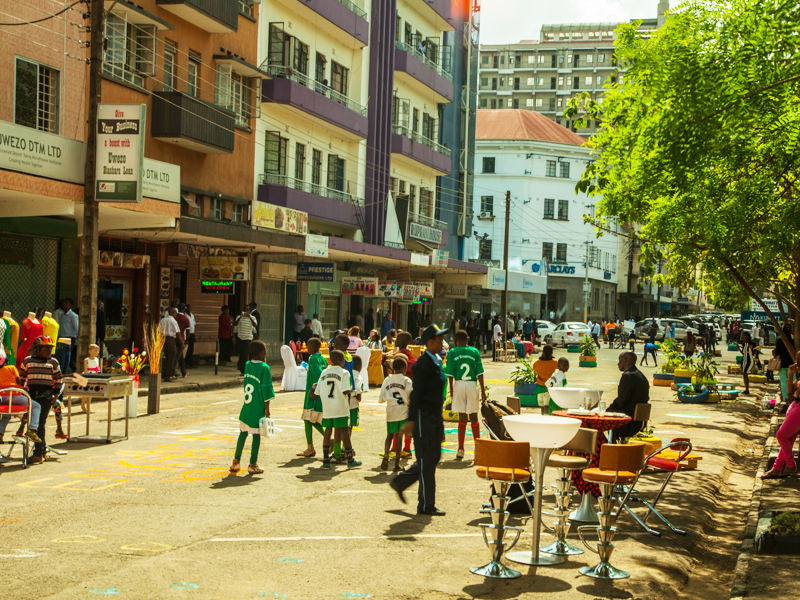 Many recommendations of the Nairobi 1973 Master Plan were not realized due to shortages in capacity by the old City Council, as well as a lack of commitment and political will. The current plan proposes more private sector involvement, something not evident in the previous plans. Based on past experiences of non-implementation of plans, we think that it could be better to focus on site specific interventions involving as many parties as possible, including the citizens and the private sector as well.

Since 2012, UN-Habitat and Nairobi City Council have been working together with a wide range of stakeholders to improve public spaces in Nairobi. A joint public space assessment was carried out in 2015, resulting in 1,700 public spaces being identified in the city. This assessment is now being taken forward to develop a public space strategy for Nairobi which will identify 60 priority public spaces for upgrading. This work forms part of UN-Habitat’s Global Public Space Program which aims to improve public spaces worldwide. An important part of UN-Habitat’s public space work is Block by Block, an innovative program in which Minecraft is used as a community participation tool in urban design. Minecraft is one of the world’s most popular computer games, with over 100 million users, best imagined as a ‘digital Lego’, in which players build complex structures or compete against each other in community-designed competitions. We want to bring this approach to a next level including VR.

Placemaking Nairobi aims to empower the youth in developing new ideas to transform potential public spaces into self-sustainable public places where democratic discussions and free expression shall be nurtured. We aim to achieve this by involving the youth into the production of interactive videos and Virtual Reality products made by using video games such as Minecraft and VR ad-hoc footage.

We want to inspire and motivate potential investors and private citizens in financing these ideas and turn them into proper social enterprise ventures. The public spaces are for social and cultural activities, for meetings and discussions on politics, democracy and culture and are meant for the wider public, but primarily youths. This project will be implemented with the support of the UN-Habitat and Nairobi City Council. While the City Council will help identify the potential public spaces, Cultural Video Foundation assisted by UN-Habitat, will run the participatory workshops and produce the multimedia proposals.

We really pursue goals of a larger scope to this project that would entail several months of planning and organizing and in the end revitalize a large number of public spaces throughout Nairobi, the budget really only allows for the tackling of one such public place. This would also serve a great starting point from which to continue in the not so distant future.

In retrospect, the project is innovative in terms of the participatory methods used for achieving the goal of transforming public spaces into public places. The variety of products can accurately depict the near limitless potential that each public space holds, especially through the use of Virtual Reality and Minecraft, through which Cultural Video Foundation and Black Rhino VR can create additional layers of aspiring ventures and attractions to investors and citizens interested in transforming potential public spaces.

This project is supporting the collaboration of all levels of civil society including women and youth groups, city administration and urban developers to rethink public spaces. The workshops will facilitate the communities’ ability to work towards economic growth and will nurture new discussions for infrastructure development and public spaces through innovative methods. Both the institutions and the CSO’s will strengthen their capacities to build inclusive urban policies.

Outcome
Contribute to the expansion of the participatory urban development culture. This is a common goal which unites and challenges citizens and politicians, scientists and social entrepreneurs, civic education trainers and artists to be more involved.

Performance indicators
Youths ideas will be exposed to reflections and considerations by the other actors involved. Projects ideas will be published online and share on social media.

Outputs
Three ideas for potential redevelopment proposals will be produced, of which one will be chosen and developed into 3D immersive media presentations. A selection committee composed of the Nairobi City Council will choose the first public space to be redeveloped. This selected site and inspired idea will have a multimedia presentation developed for and with them using VR and Minecraft technology, to then be shared with the public and potential investors.

Activities
This stage includes the selection process of one chosen idea for 3D production.
1. Minecraft workshop for individual who’s idea was chosen. Here he will learn to design his idea into a more lifelike reality.
2. Implement the Minecraft design into the multimedia presentation including the VR applications.
3. Share the presentation with the public and potential investors through social media platforms.

Since 2007, CVF has been working on different areas of intervention, from humanitarian affairs to music, urban culture and place making. We have created the BUS collective and Art@TheBUS, which involves urban youths from different areas of Nairobi. Previously, we have worked on an EU funded project “Art Against Poverty” that involved more than 200 artists from Kenya and Tanzania. In 2011 we have produced Twende Berlin, a musica documentary about gentrification and in 2009 Maksaniflani, a documentary about public space in Kenya. We also started Urban Mirror, an eParticipation project on urban culture in Nairobi, funded by Goethe Institute.

Since 2004, Dr. Vincenzo Cavallo has been working in Europe, Africa and Latin America in the field of media for democracy, development and culture. In December 2010 he obtained his Ph.D. in Communication and New Technologies from IULM University – (Free University of Languages and Communication of Milan) with a thesis on participatory media for democracy in Kenya. The title of the thesis is: “Kenya eParticipation Ecologies and the Theory of Games”. He studied how power dynamics are influencing the development of the Kenyan media landscape and how indigenous African forms of political participation such as “Mabaraza” are reinterpreted and used to generate online communities, mobile networks, radio programs and new forms of hybrid communication systems.

Vincenzo arrived in Kenya in 2007 thanks to a UN-Fellowship programme during which he worked as a consultant for UN/DESA i-Parliament program, assisting African parliaments in implementing new information systems to enhance their transparency and accountability.

In 2008 he started to work full-time for Cultural Video Foundation the international NGO he co-founded. Since 2008 he has been working on different projects that involved media, democracy, development and public art.